Degiat Bahta Hagos Aba T’mer (ባህታ ሓጎስ) of Akele Guzay who had previously opposed Abyssinian encroachment into his territory, rebelled against Italian Occupation. He is considered a symbol of resistance to foreign domination. 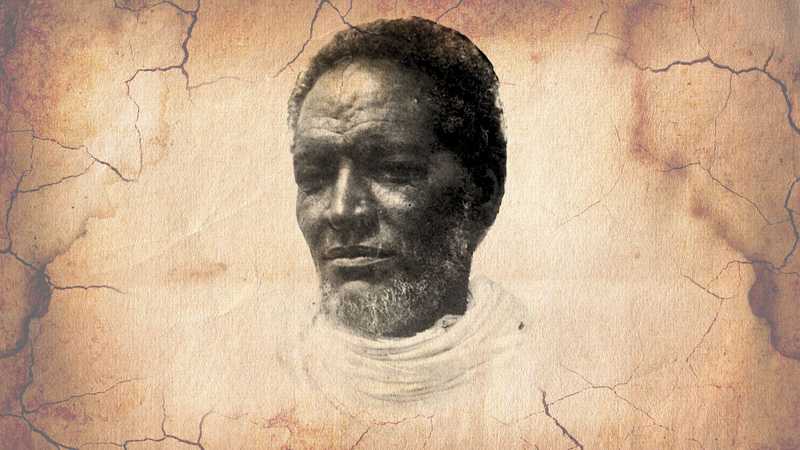 Degiat Bahta Hagos Aba T’mer (ባህታ ሓጎስ, ኣባ ጥመር) was Dejazmach of Akele Guzay, and retrospectively considered an important figure in the Eritrean resistance to foreign domination. He was born in the mid-19th century in the town of Segeneiti. Ferdinado Martini, a member of the Italian Parliament who was sent to evaluate the viability of the new colony of Eritrea, once wrote the following about him:

Bahta was in his mid forties. He was tall and thin. When you look at him you get the impression that he is cunning and crooked. But his land that extends from here to Mereb [River], doesn’t know any one who was more honest than him. He was a Muslim who converted to Catholicism with his wife. His new faith bestowed on him a greater degree of  integrity. There is no chief in his caliber in the area. One word from him would put an end to any conflict. Every body respects him and submits to his rule because he is humble, generous and committed to his friends and us, the Italians. He shows less pride than the other Eritrean chief’s because he is more intelligent than them. Lastly, Bahta Hagos is not a saint because he killed his brother.

one of his brothers wanted to be a robber to earn his living. Bahta tried to persuade his brother to stop robbery and help the family establish their rule in their land. He told his brother that by doing so they will be able to win more friends and to show in front of God that they will regain liberty for their people. His brother refused to listen.  Later  Bahta resorted to threats.  He told his brother that he will either kill him or will he will surrender to Alula to kill him. His brother told Bahta, “Go and surrender to Alula”. Bahta Hagos spent that night praying to God and at dawn went and killed his brother. But now he repents that and at times he suffers of nervous episodes. Unlike all the leaders that we met who treat their subjects with brutality, he resorts to asking for apology after any harsh measure, and treats his subjects like a father. 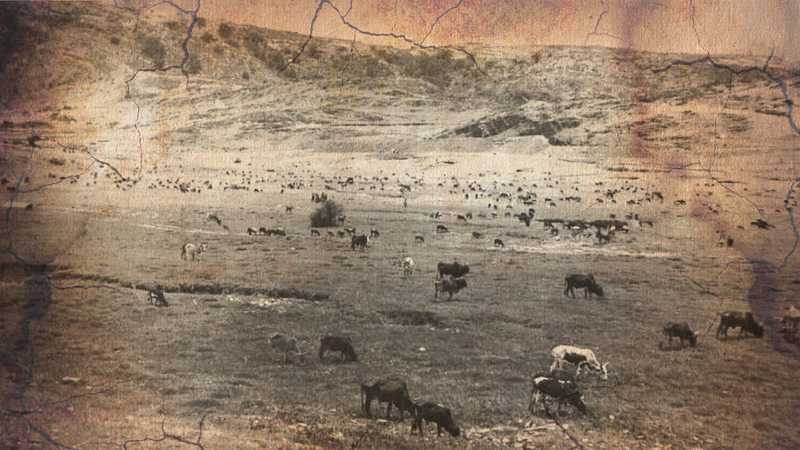 Bahta originally gained recognition in 1875 when he killed Embaye Araya son of Ras Araya. Emperor Yohannes had appointed Araya as overlord of the area under Bahta Hagos. In the first week of October 1875, Araya’s 18-year-old son, Embaye, visited Segeneiti to demand money. Having milked the part of the province assigned to him, Embaye shoved aside the commander of the troops his father had appointed there, wounded a priest who tried to intervene, and killed a brother of Hagos Andu, Bahta Hagos’s father. This provoked fury and the villagers rioted. Embaye’s men fired, but the enraged villagers allowed them no time to reload their single-shot muskets.  The villagers killed two-dozen of Embaye’s men. Half a dozen men of Segeneiti also died, including kinsmen of Bahta Hagos. Subsequently, Bahta avenged his relatives by killing the prince with a spear. He, together with two of his younger brothers – Kahsu and Sengal – and other young men, fled to another village below the escarpment. 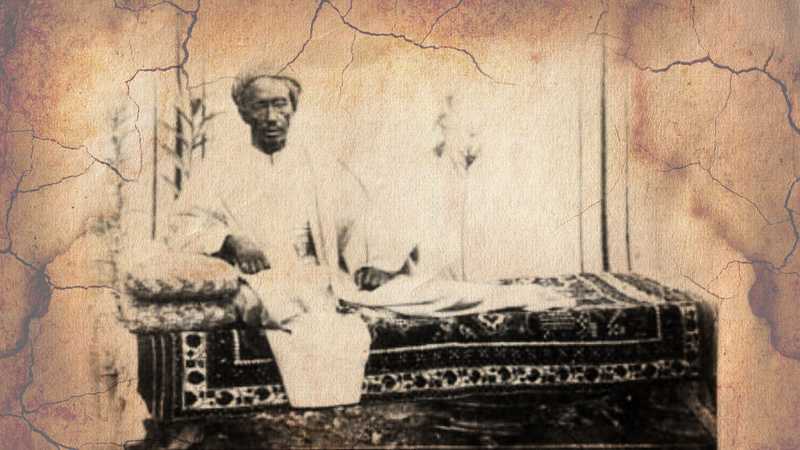 In 1876, Alula, Yohannes’s trusted lieutenant, replaced Araya. Alula burned Bahta Hagos’s house and those of his relatives and confiscated their cattle and other property. Despite the best efforts of Ras Alula’s lieutenant Balatta Gabru in 1880, Bahta evaded capture and later that year allied himself with the Egyptian garrison at Sanhit, currently Keren area. There, Bahta Hagos took refuge together with his brothers with the Habab. Because the Habab were pastoralists, Bahta and his men helped protect the tribes from other invaders.

In 1885, as an Italian colonial presence replaced the defeated Egyptians, and their control of Massawa, Bahta moved to ally himself with them and their General, later provincial governor Oreste Baratieri. He fought alongside the Italians against the Mahdists at the Battle of Agordat in December, 1893.

However Bahta became increasingly frustrated with the conduct of the Italian Colonial Government and their soldiers, particularly the expropriation of land from the clergy. In 1893, the Italians reserved some 19,000 hectares of land for European use. A year later, almost fifteen times that amount was set aside and the first half a dozen Italian families began arriving to settle in the Eritrean highlands.

He understood that Emperor Menelik of Ethiopia was consolidating his power to the south with plans to displace the Italians. In June 1894, he, along with Ras Mengesha Yohannes (son of Emperor Yohaness IV), Ras Alula, and Ras Woldemikael Selomon traveled to Addis Ababa to mend relations with the Showan Monarch and to gain his support against the Italians.

In December 1894, Bahta unilaterally led his force of 1,600 men in direct revolt against the Italians, claimeing Ras Mengesha of Tigray will lend him aid. He captured the Italian administrator at Segeneiti, which was then the capital of the province, and declared an independent Akele Guzay. He also cut the telegraph lines from Segeneiti to Asmara to buy himself time to mobilize a larger army. He proclaimed himself “An avenger of rights trampled on by the Italians”.

Baratieri immediately ordered Major Toselli and his battalion to move on Segeneiti. Upon arrival, the Major entered negotiations with Hagos who stalled him with excuses and promises of loyalty. The Italian reinforcements started to arrive and by the evening of December 17th, Tosselli had 1,500 men and two artillery pieces. He went to move against Hagos on the morning of December 18th, but found him gone. 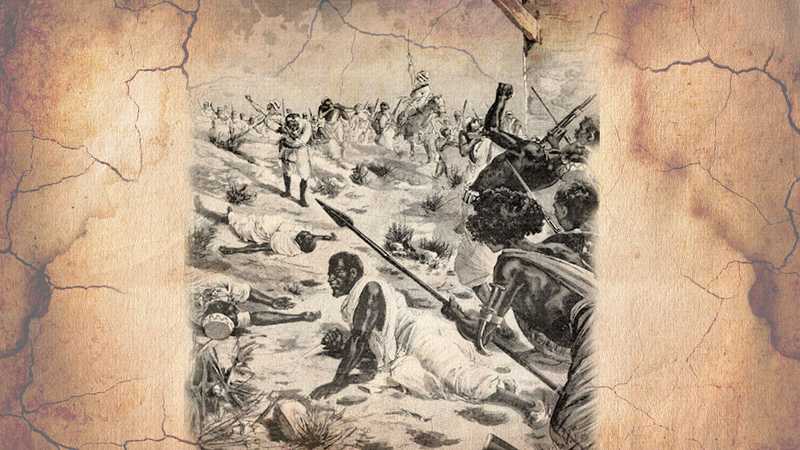 Hagos had secretly abandoned Segeneiti in the night and had moved his forces north against the Italian garrison of 220 men at the small fort of Halay, commandeered by Captain Castellazzi. Tosselli correctly guessed this was Hagos’ plan, and marched his men towards Halay

Bahta Hagos called for Castellazzi to surrender and abandon the fort. Negotiations continued until the afternoon, when Hagos’ patience came to an end and the attack was ordered. Though low on ammunition, the Italians held out until late afternoon. Toselli’s forces arrived at that moment and launched an attack on Hagos’s army rear. Degiat Bahta Hagos was shot during the battle and died at Ona-keran in Halay.

Because of his influence at the time, after his death, the Italian colonial government banned his burial fearing that his grave would become a source of further rebellions. However, his body was secretly interred in a grave by his loyal friend, Soquar Bahro Digsa, in Halay and later moved to Segeneiti in 1963. Following Eritrean independence in 1991, his remains were again interred in December 2007 with full honours in recognition of his struggles.