UN Resolution 390 A (V) passed to federate Eritrea with Ethiopia. This was a U.S. sponsored compromise to find a middle ground between full union with Ethiopia and full independence ignoring the majority wish of Eritreans. 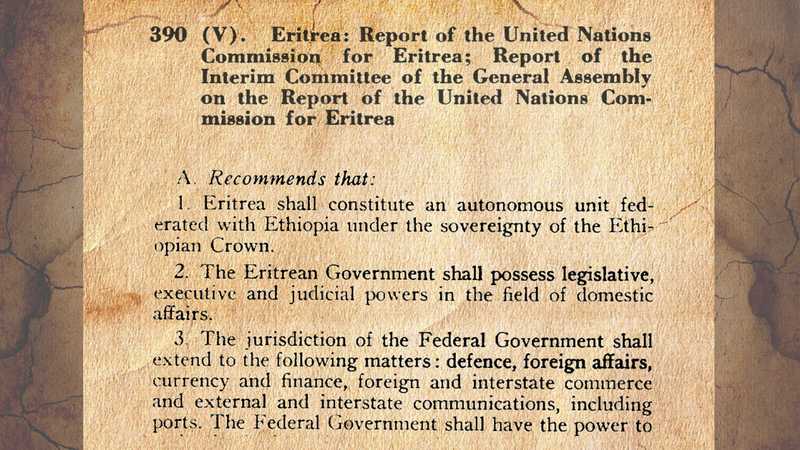 UN Resolution 390 A (V) - federatation of Eritrea with Ethiopia

Following the adoption of UN Resolution 390A(V) in December 1950, Eritrea was to be federated with Ethiopia under the prompting of the United States.The resolution called for Eritrea and Ethiopia to be linked through a loose federal structure under the sovereignty of the Emperor. Eritrea was to have its own administrative and judicial structure, its own flag, and control over its domestic affairs, including police, local administration, and taxation. The federal government, which for all intents and purposes was the existing imperial government, was to control foreign affairs (including commerce), defense, finance, and transportation. The resolution ignored the wishes of Eritreans for independence, but guaranteed the population democratic rights and a measure of autonomy.

This was a U.S. sponsored compromise to find a middle ground between full union with Ethiopia and full independence, without fully assessing the wish of the majority of Eritreans through referendum or other means.

Eritrea: report of the United Nations Commissioner in Eritrea

VII. RESOLUTIONS ADOPTED ON THE REPORTS OF THE AD HOC POLITICAL COMMITTEE

Recalling its resolution 390 A (V) of 2 December 1950, providing that Eritrea be constituted an autonomous unit federated with Ethiopia under the sovereignty of the Ethiopian Crown,

Having noted that the conditions laid down in paragraph 13 of resolution 390 A (V) of 2 December 1950 have been fulfilled, and that on 11 September 1952 the Federation of Eritrea with Ethiopia was proclaimed,

Noting further the final report[1] of the United Nations Commissioner in Eritrea of 17 October 1952 and the report[2] of the Administering Authority of 27 October 1952,

Noting with appreciation the part played by the United Nations Commissioner and the former Administering Authority in Eritrea in preparing Eritrea to take its place in the Federation,

Noting also with satisfaction the contribution made by Ethiopia to the establishment of the Federation and Ethiopia’s expression of determination scrupulously to execute the provisions of the Federal Act,